The permanent exhibition of the Municipal Museum of Obidos is a journey through the artistic production and the religious devotion of the village history. The collection bears witness to the activity of religious collegiate and cultural enrichment marked by orders to some of the biggest names in Portuguese art. There is the collection of paintings of the sixteenth and seventeenth centuries, which contains works by André Reinoso and Josefa d’Obidos. 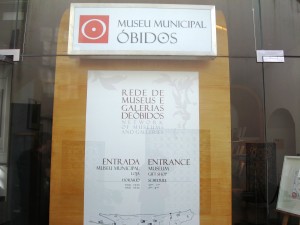 This Museum was inaugurated on June 15, 1970, attended by the then President of the Republic, Admiral Américo Tomás, the Cardinal Patriarch of Lisbon, D. Manuel Alves Cherry and several government officials. Was its first director the then mayor, Albino de Castro and Sousa (1922-1984).

The Municipal Museum is part of the West Museum Route and is home to the Museums and Galleries Obidos Network.

Another of remote antecedents that led to the museum’s foundation is reflected from some cultural achievements in Obidos, including the Sacred Art Exhibition in 1954 and the evocation of Josefa de Obidos in 1959, producing a heightened expectation effect with the closure the “regional museum”, housed in the limited space of the Gothic chapel of St. Martin, where there was an archeology collection and architectural fragments, most belonging to Lt. Col. Luis Torquato de Freitas Garcia