The Obidos Lagoon is a coastal lagoon system the longest in  the Portuguese coast. It has an approximate total area of ​​6.9 km2 and an average depth of two meters, with shares ranging from half a meter to five meters. 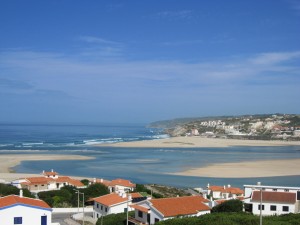 Extends essentially by two channels, to the west by the Braço Bom Sucesso  and to the east by Braço Barrosa.

The South side is the Poça do Vau and the west side is linked to Poça das Ferrarias. It has a maximum length of 6 km and a width varying between 1 and 1.5 km, with a NW-SW preferred orientation. However, this configuration tends to fluctuate considerably, with the direct consequence pushed by sea sediments into the pond.

According to ancient accounts, the Lagoon was much more extensive, reaching the foot of the hill where now stands the town of Obidos, bathing the walls of the castle West side.

In a natural way, the Obidos Lagoon, such as coastal lagoons in the medium or long term, it would turn into swamps if your sedimentary regime remained. However, human intervention accelerates the process of silting through the constant changes it causes in the watersheds leading to greater production of sediment. On the other hand, people try to reverse the situation to intervene with dredging carried out with the aim of increasing the depth of the system, extending thereby the life of these aquatic environments.

Its fauna consists of fish species such as sea bass, sole, plaice, turbot, golden, the black sea bream, mullet, but also other species such as clams, cockles, mussels, shrimp, octopus, eel, green crab among others.

The avifauna community is the group that has the most important ecological role in the ecosystem. Species were identified, among others, the heron, mallard, oystercatchers, long, curlew leg, tern, heron boieira, snowy egret, black beak gaivinha.

There´s a typical boat called Bateira used by the fishermen and the  shellfish pickers. 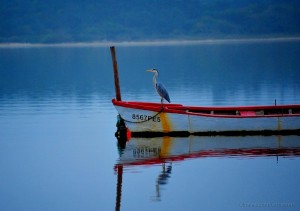 It’s characterized by being open deck vessels. They were once widely used for harvesting limo. Currently the bateiras may already have two motors (operating gasoline) one main and one auxiliary which can be used in case of failure. To maintain batteries, which happens every two years, Bateiras are immersed in water when they are parched, and then be painted.

This lagoon has all the conditions for sports like kite surf, sail, canoeing, jetski and paddle boarding .