King Peter I and Inês de Castro – a forbidden love

Inês  is known as lover and posthumously-recognized wife of King Peter I of Portugal. The dramatic circumstances of her relationship with Peter I, which was forbidden by his father King Afonso IV, her murder at the orders of Afonso, Peter’s bloody revenge on her killers, and the legend of the coronation of her exhumed corpse by Peter, have made Inês de Castro a frequent subject of art, music, and drama through the ages. 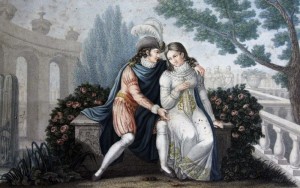 Inês came to Portugal in 1340 as a maid of Constance of Castile, recently married to Peter, the heir apparent to the Portuguese throne. The prince fell in love with her and started to neglect his lawful wife, endangering the already feeble relations with Castile. Moreover, Peter’s love for Inês brought the exiled Castilian nobility very close to power, with Inês’s brothers becoming the prince’s friends and trusted advisors. King Afonso IV of Portugal, Peter’s father, disliked Inês’s influence on his son and waited for their mutual infatuation to wear off, but it did not.

Constance of Castile died in 1345. Afonso IV tried several times to arrange for his son to be remarried, but Pedro refused to take a wife other than Inês, who was not deemed eligible to be queen. Peter’s legitimate son, future King Ferdinand I of Portugal, was a frail child, whereas Peter and Inês’s illegitimate children were thriving; this created even more discomfort among the Portuguese nobles, who feared the increasing Castilian influence over Peter. Afonso IV banished Inês from the court after Constance’s death, but Peter remained with her declaring her as his true love. After several attempts to keep the lovers apart, Afonso IV ordered Inês’s death. Pêro Coelho, Álvaro Gonçalves, and Diogo Lopes Pacheco went to the Monastery of Santa Clara-a-Velha in Coimbra, where Inês was detained, and killed her, decapitating her in front of her small child.

When Peter heard of this he sought out the killers and managed to capture two of them in 1361. He executed them publicly, ripping their hearts out claiming they didn’t have one having pulverized his own heart.

Peter became King of Portugal in 1357. He then stated that he had secretly married Inês, who was consequently the lawful queen, although his word was, and still is, the only proof of the marriage. 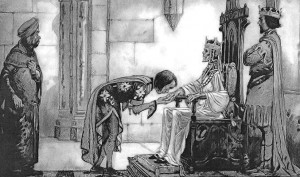 Legend has it that he had Inês’s body exhumed from her grave and forced the entire court to swear allegiance to their new queen by kissing the corpse’s hand. She was later buried at the Monastery of Alcobaça where her coffin can still be seen, opposite Peter’s so that, according to the legend, at the Last Judgment Peter and Inês can look at each other as they rise from their graves. Both marble coffins are exquisitely sculpted with scenes from their lives and a promise by Peter that they would be together até ao fim do mundo (until the end of the world). 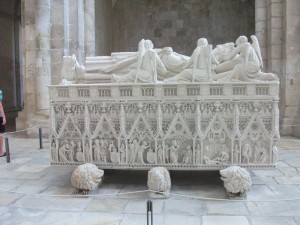 Inês de Castro and Peter I had the following children: